The Morning: Covid and Race

One of the defining characteristics of the pandemic’s early stages was its disproportionate toll on Black and Latino Americans.

“We’re most vulnerable to this thing,” Teresa Bradley, a nurse in Michigan, told The Times in 2020, after surviving a Covid hospitalization. When she was wheeled through the emergency room, she was pained to see that every other patient she saw there was also Black.

These large racial gaps seemed as if they might persist throughout the pandemic, especially because white and Asian Americans were initially quicker to receive vaccine shots. Black and Latino Americans, by contrast, had less convenient access to the shots and many were skeptical of them.

But these large racial gaps in vaccination have not continued — and as a result, neither have the gaps in Covid death rates. 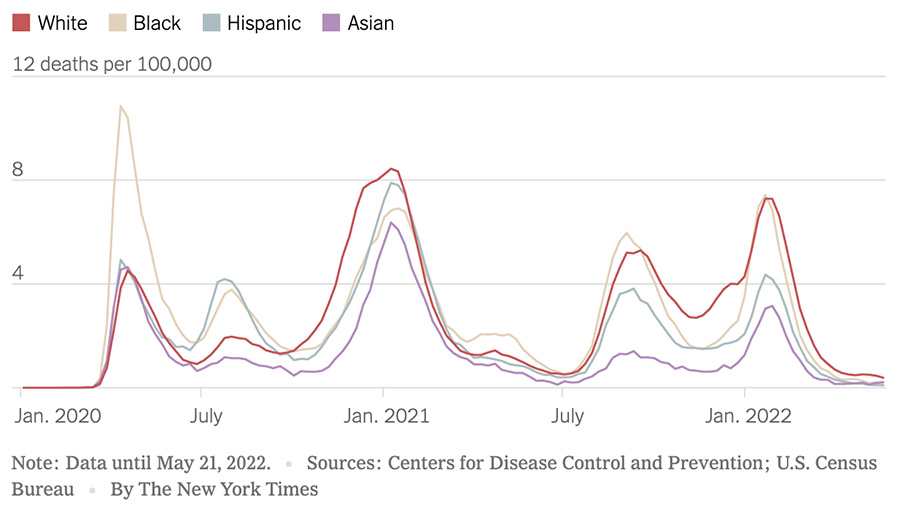 It is a remarkable turnabout, a story of both public health success and failure.

The successful part of the story is the rapid increase in vaccination among Black and Latino Americans since last year. Today, the vaccination rate for both groups is slightly higher than it is for white Americans, according to the Kaiser Family Foundation’s surveys.

That has happened thanks to intense outreach efforts by medical workers, community organizers and others. In Chattanooga, Tenn., for example, the Rev. Steve Caudle preached about the importance of vaccines: “If it’s the truth, if it’s going to save lives, it should be preached from that pulpit,” he told The Chattanooga Times Free Press. In Imperial County, just north of California’s border with Mexico, health workers took advantage of the medical infrastructure that Obamacare helped create, according to Joe Mathews of Zócalo Public Square.

One crucial feature of these campaigns has been their bottom-up nature. Local leaders have often designed outreach campaigns to fit their own communities. Rachel Hardeman, the director of the Center for Antiracism Research for Health Equity at the University of Minnesota, described this approach to me as “centering at the margins.”

It can be especially effective when doctors and nurses listen to people’s vaccine skepticism and respond respectfully and substantively. Dr. Viviana Martinez-Bianchi, a family physician in North Carolina, has described this attitude as “listening with humility.”

Why haven’t you heard more about the narrowing of Covid’s racial gaps? I think part of the reason is that many experts and journalists feel uncomfortable highlighting shrinking racial gaps in almost any area. They worry that doing so will somehow minimize the problem of racism and the country’s enduring inequities.

Certainly, there are important caveats to the Covid story. For one thing, the total death rate remains higher for Black and Latino Americans, because the early disparities were so huge. For another, the unequal nature of underlying health conditions — and access to good care — means that a Black person remains more vulnerable on average to severe Covid than a white person of the same age, sex and vaccination status.

Here are the trends based on age — which still show a narrowing gap, especially in recent months: 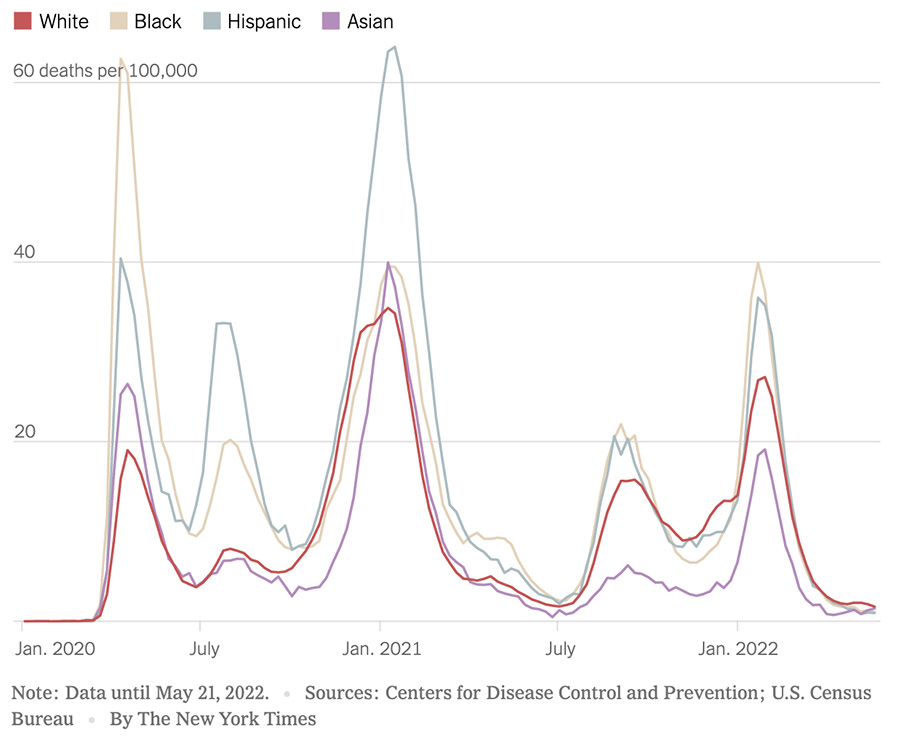 Even with these caveats, the larger story remains: Covid has killed a smaller percentage of Black, Latino or Asian Americans over the past year than white Americans. To deny that reality is to miss an important part of the Covid story.

It also serves as a reminder that rigorous, well-funded public health campaigns have the potential to narrow racial gaps. And there are many stark racial gaps in public health: Traffic deaths, which have surged during the pandemic, disproportionately kill lower-income Americans and people of color. Gun violence, which has also surged, has an even more disproportionate effect. Diabetes, H.I.V., high blood pressure and infant mortality all take a higher toll on Black America.

With Covid, the country mobilized to reduce the racial vaccination gap — and succeeded. With many other public health problems, a similar focus could probably save lives.

As I mentioned above, the narrowing of Covid’s gaps does involve some bad news: The share of white Americans who have received a Covid vaccine shot has barely budged since last summer.

The main culprit is politics. Only about 60 percent of Republican adults are vaccinated, compared with about 75 percent of independents and more than 90 percent of Democrats, according to Kaiser. And Republicans are both disproportionately white and older. Together, these facts help explain why the white death rate has recently been higher than the Asian, Black or Latino rate.

In heavily conservative, white communities, leaders have not done as good a job explaining the vaccine’s benefits — and Covid’s risks — as leaders in Black and Latino communities. Instead, many conservative media figures, politicians, clergy members and others have amplified false or misleading information about the vaccines. Millions of Americans, in turn, have chosen not to receive a lifesaving shot. Some have paid with their lives.